In exciting news, Meghan Markle was announced today as the feature star on the cover of Vanity Fair’s October issue. 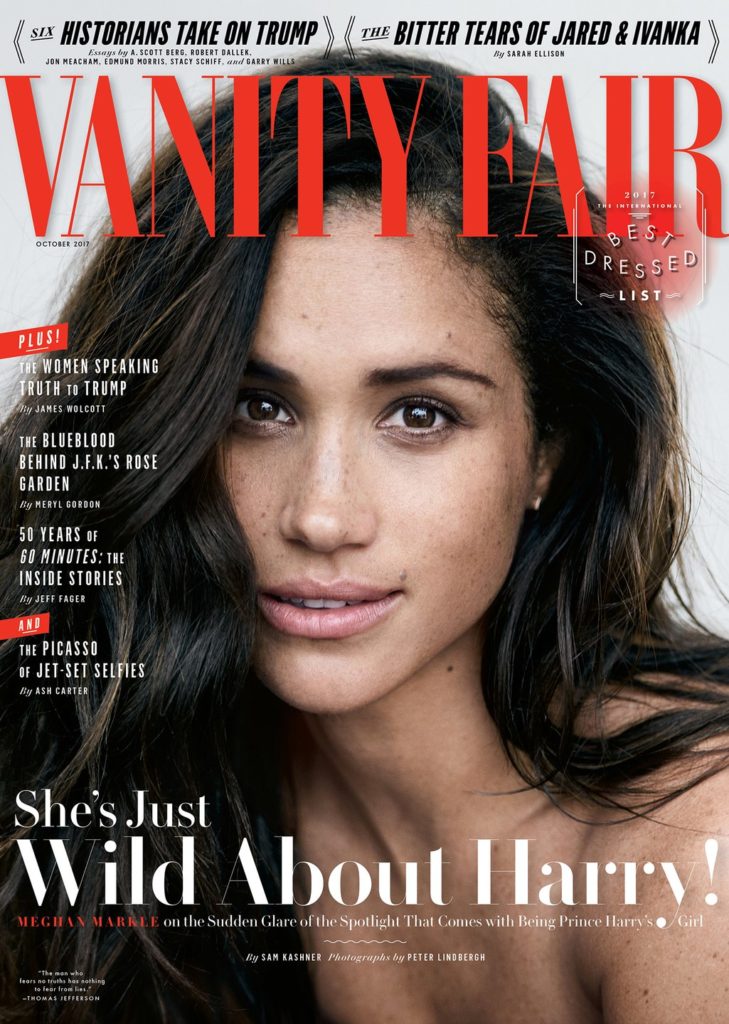 The enlightening article, in which Meghan shares quotes about Prince Harry, her TV show Suits and her life with the fame dating a British Prince brings even has the author, Sam Kashner, raving about Meghan’s home cooking. The article also shared a variety of photographs which highlight Meghan’s classic chic style. The cover article features Meghan wearing 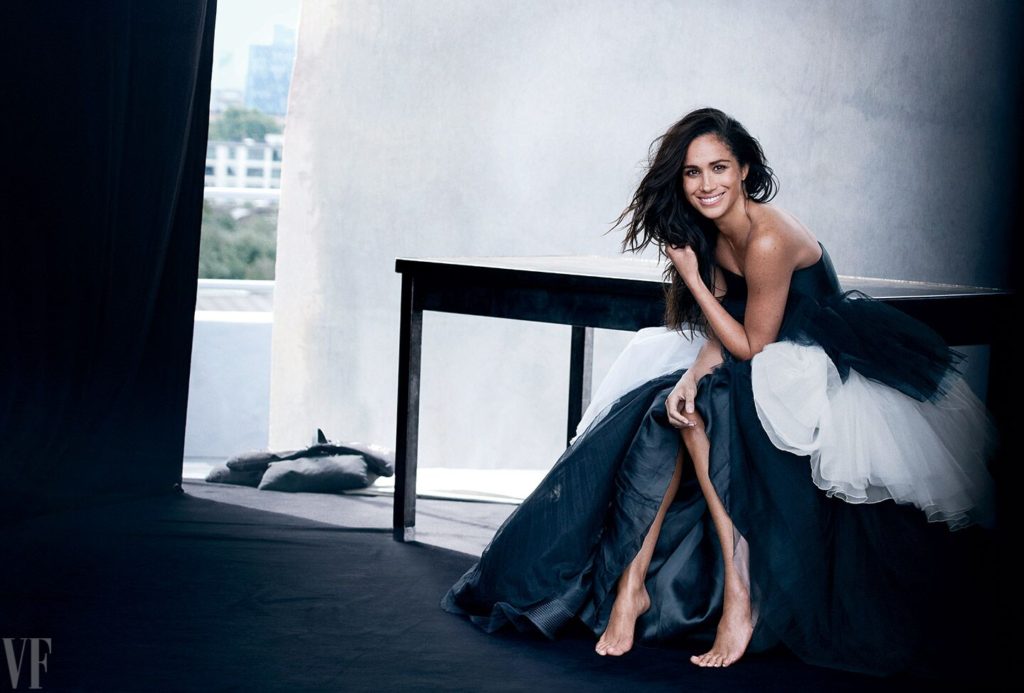 The gown in the photo above is by Carolina Herrera, from her Resort 2018 collection. It’s called the Mikado Bustier Tulle Gown and costs a staggering $7,990 – when it becomes available. 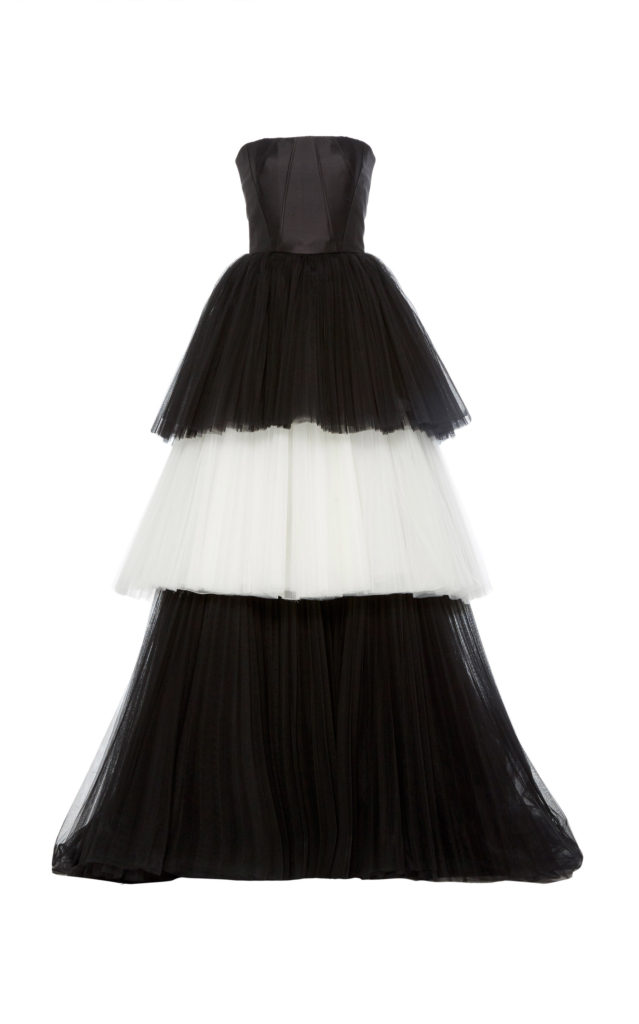 Here are some of our favourite glimpses into Meghan Markle’s life, as shared by the article:

“Markle was wearing a red, knee-length floral dress (“Erdem, a designer I’ve been wearing for years”), with her rescue dogs, Bogart and Guy, wagging their tails beside her. A slim brunette with a lightly freckled, glowing complexion and an upturned nose, she looks like the sun-kissed California girl she’s always been.”

We’ve known Meghan was a fan of Erdem, a Canadian designer, but it’s nice to see her sharing that this is not just a new fashion relationship. You’ll no doubt remember the Erdem dress Meghan wore to accompany Harry to a Jamaican wedding earlier this year? 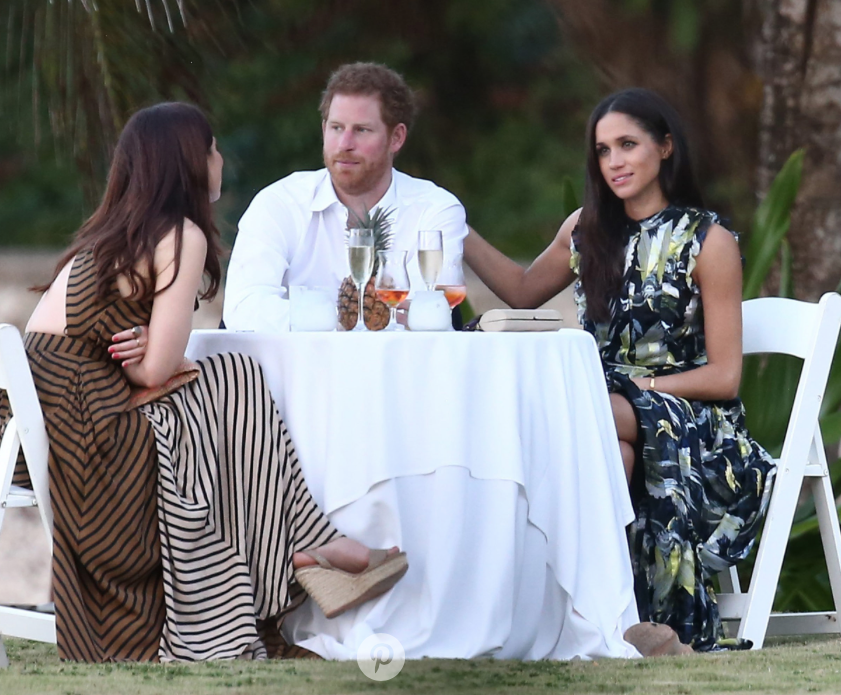 Meghan also shared the challenges of her newfound fame.

Markle, new to fame, has handled the hoopla with surprising aplomb. “It has its challenges, and it comes in waves—some days it can feel more challenging than others,” she says. “And right out of the gate it was surprising the way things changed. But I still have this support system all around me, and, of course, my boyfriend’s support.”

We can only imagine how much her life must have changed overnight for a girl from LA. The photo below captures a real California girl essence, doesn’t it? The coat is believed to be by Max Mara and the earrings are from Californian designer Zofia Day. 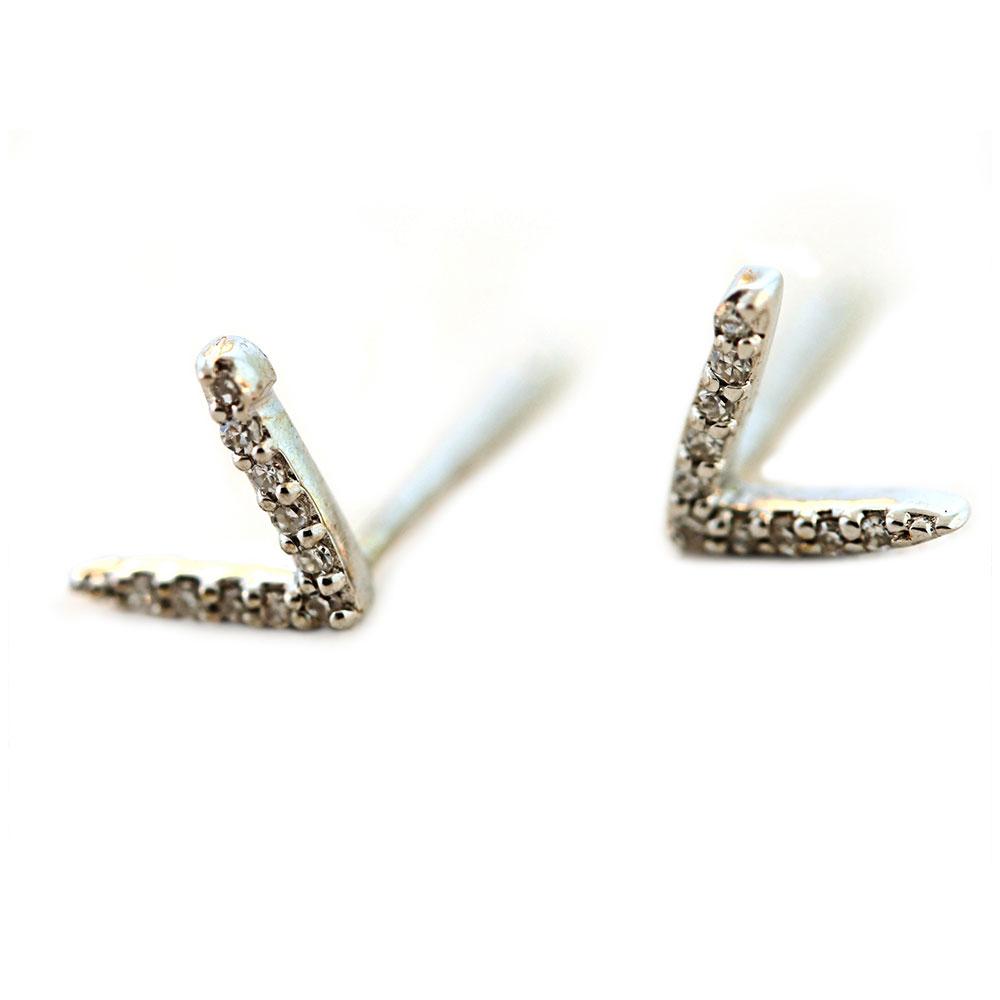 Zofia Day’s designer, Lisette Polny, confirmed the earring design to us and also confirmed that they were thrilled with her wearing them. 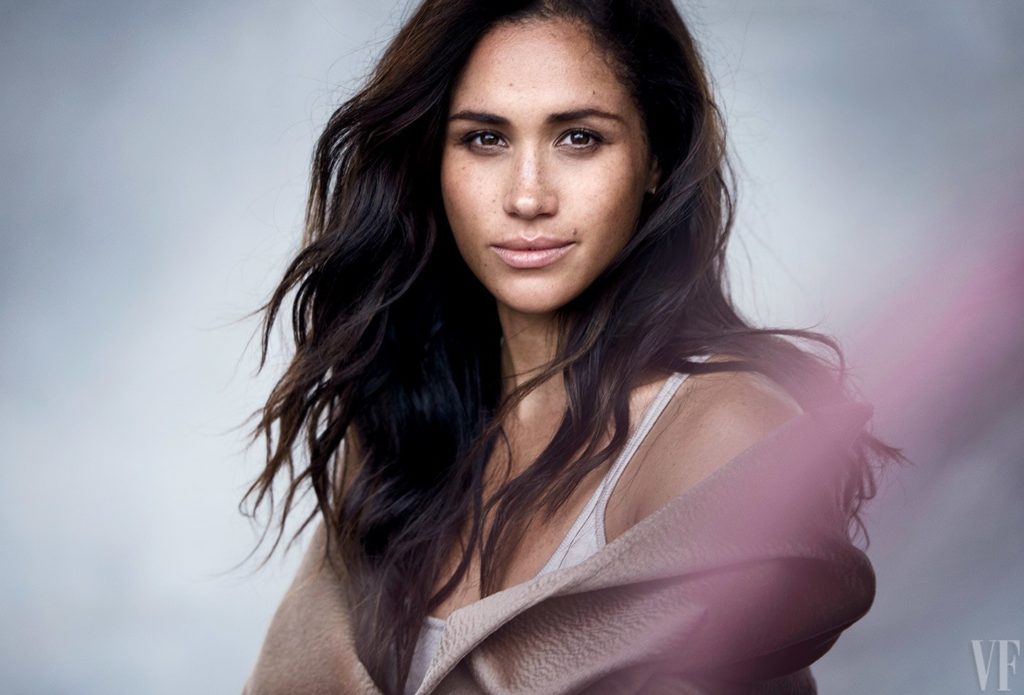 One of our favourite things about the article were the great photos included, all styled by Jessica Diehl, who styles many stars for Vanity Fair. She was the style brains behind the Caitlyn Jenner shoot a few years ago. Meghan also shared how she almost had a style misstep in auditioning for Rachel Zane on Suits what now amounts to over 100 episodes ago.

When she auditioned for the role, Markle showed up in black jeans, a plum-colored spaghetti-strap top, and heels. It suddenly occurred to her that for the screen test she needed to look less casual and more like a lawyer. She dashed into an H&M and bought a little black dress for $35. Sure enough, she was asked to change into the dress, which she hadn’t even tried on. Thank God it fit.

Wouldn’t we all love to see what that little black H&M dress was?? In the meantime, we can swoon over this photo below. The shirt and coat are from Burberry and the jeans are by AG. 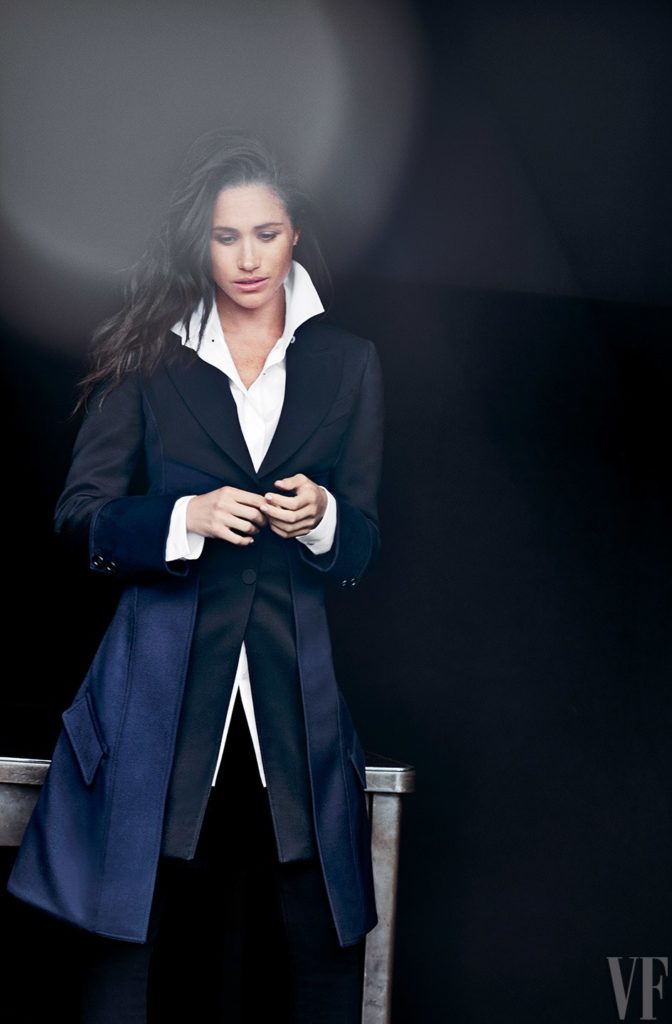 The article also shares Meghan’s thoughts about Prince Harry – which included the L word! – and how the relationship not has changed her.

“I can tell you that at the end of the day I think it’s really simple,” she says. “We’re two people who are really happy and in love. We were very quietly dating for about six months before it became news, and I was working during that whole time, and the only thing that changed was people’s perception. Nothing about me changed. I’m still the same person that I am, and I’ve never defined myself by my relationship.”

Strong, independent and happy – three great things for a woman to be. 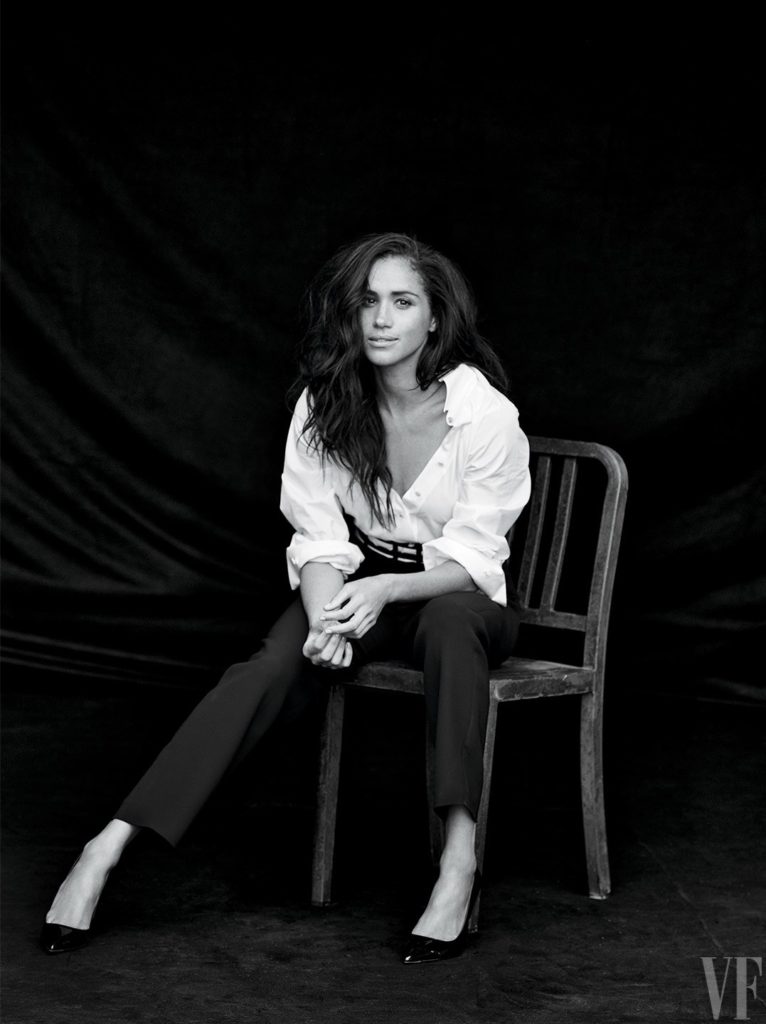 In the black and white photo above, Meghan is wearing a waist-cinching pair of Giorgio Armani pants, a white dress shirt, and patent black heels. The white shirt/pants look is very flattering and looks great on Meghan. Both pieces are by Armani, whereby the shoes the Romy in black leather by Jimmy Choo. It’s not the first time we’ve seen Meghan in the Romy for a photoshoot – she’s previously been seen in an ombré glitter pair. Our contributor Laura shared this screen grab from the behind the scenes clips (you can see the video at the bottom of the post! 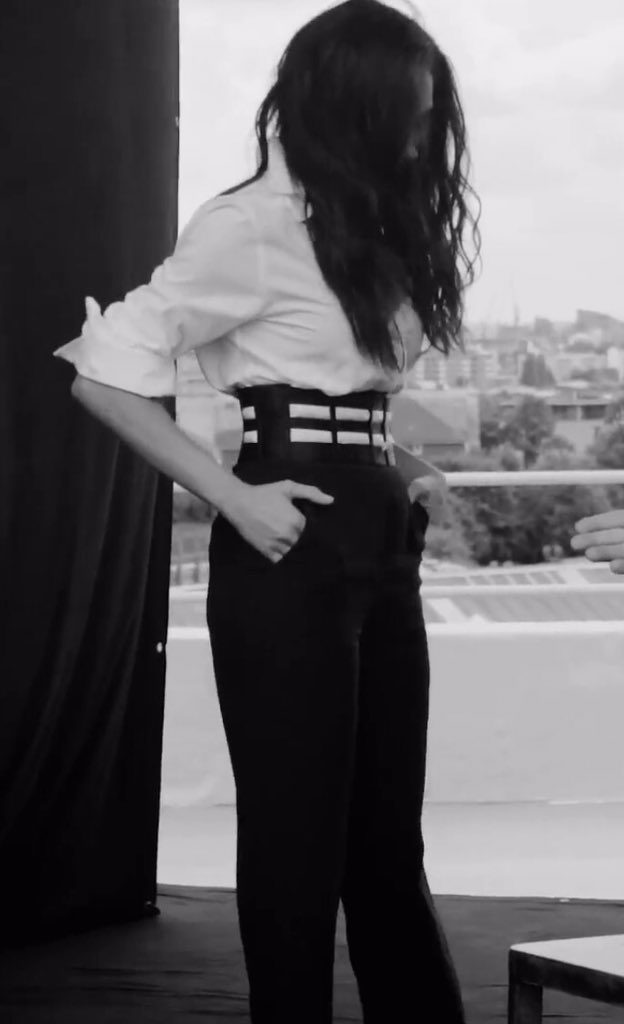 And lastly in the article we were left with a quote from Meghan’s good friend, actress Abigail Spencer, who tried to sum up Meghan’s style and why Prince Harry might have fallen for her. Spencer said:

“She’s got warm elegance, though her style is hard to pin down. It’s classy and timeless. When you’re talking to her, you feel like you’re the only person on the planet. And it’s just wonderful to see her so in love.”

We’re so glad that Meghan decided to share this happy time in her life with us… And yes, we are snow really looking for that royal engagement and wedding in the future! 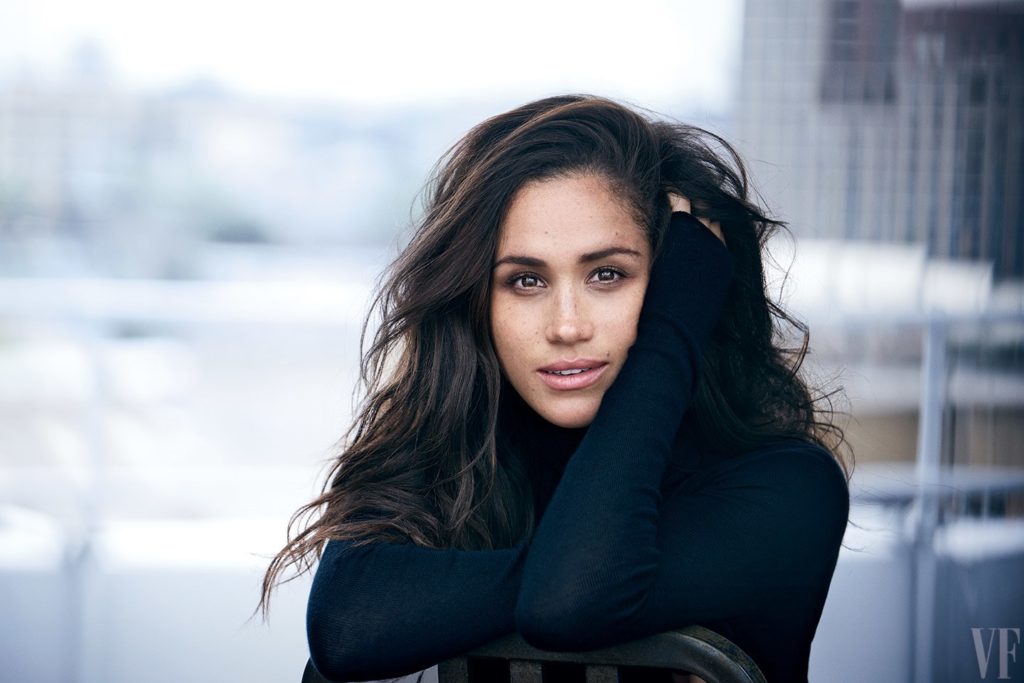 In the photo above, Meghan is wearing a turtleneck by Salvatore Ferragamo. 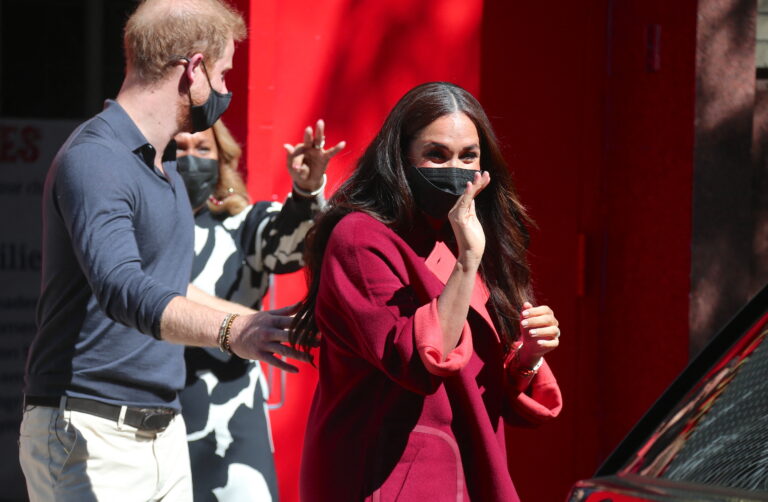 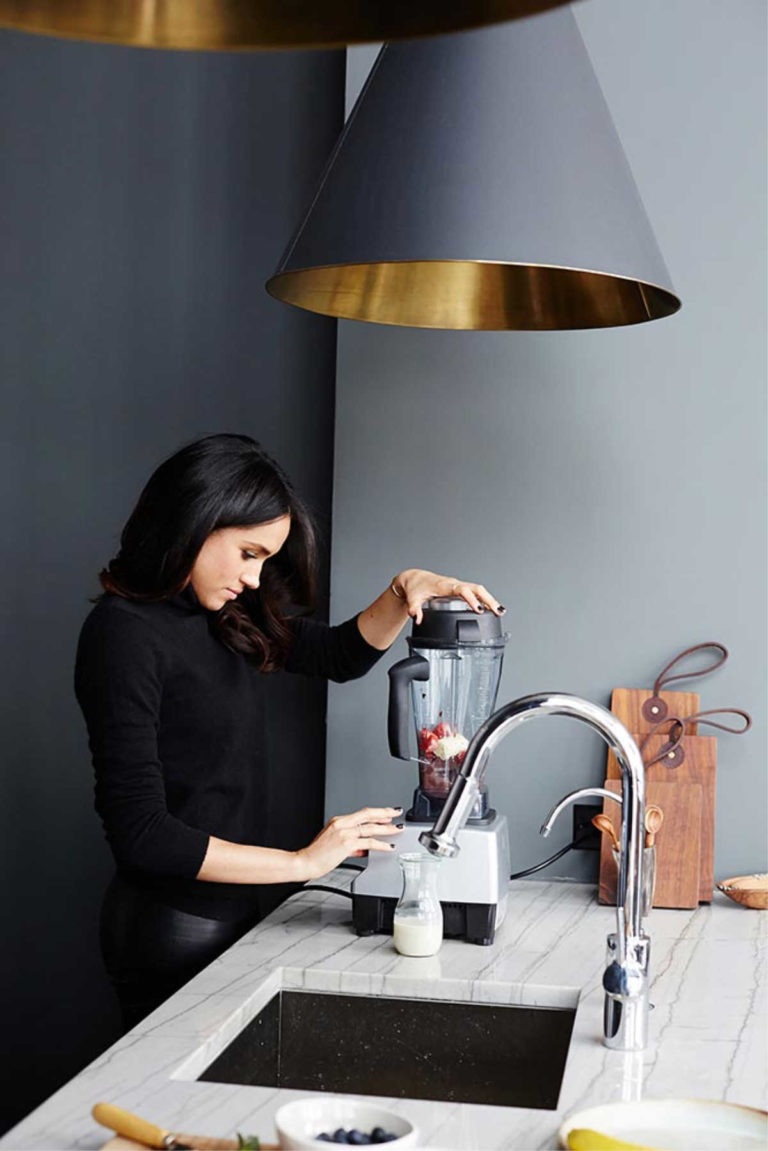